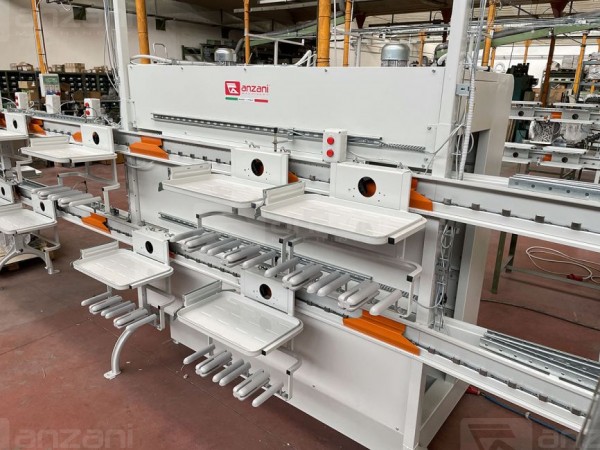 MULTIPLEX CONTACT 4.0 is a motorized chain conveyor, equipped with stop stations for trolleys, suitable for the assembly and finishing of footwear. If it is installed in the assembly department, it is possible to insert automatic heat treatments (humidification, heat setting, glue drying, cold stabilization). Multiplex Contact 4.0 is an "Industry 4.0" system as, thanks to a management software, it is possible to set the standard time of each operation, to then detect the actual production times, as well as to set the parameters of the conveyor and the connected machines. At the loading point of the conveyor, an operator selects on a PC the article to be placed on each trolley, in this way the software will know what are the standard times of each operation and the parameters of the heat treatment machines associated with the single trolley, allowing thus the selfregulation of the heat treatment machines and the automatic setting of the standard times in the individual stations. After loading the material on the trolley and choosing on the PC which article it is, the trolley automatically arrives at the first station, where it is put on hold thanks to a stop station, the arriving trolleys will stop accumulating, thanks to a chain release system, assembled on the trolley itself. With a slight push, the operator moves the trolley from the stop station to the processing station, at this moment the software identifies which trolley it is and records the production time of the single operation, which is stopped, once the operator finishes the job and gives a slight push to the trolley, which re-engages the transport chain, which will take it to the next operation.

Enter Name and E-mail to download the pdf catalogs.

Systems for Assembly and Finishing